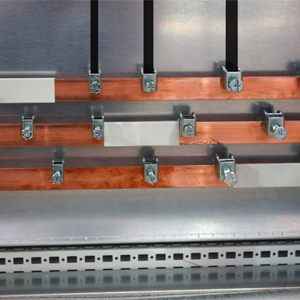 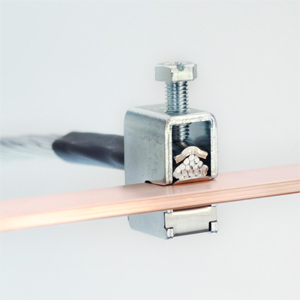 For collecting a large number of wires in a restricted space

Sometimes, albeit rarely, N and PE conductors have to be collected at a point in controls or switchgear systems. Bimetallic cable lugs are still widely used for connecting supply lines on copper busbars. Holes need to be drilled into the copper busbars at intervals in order to fix the wire with a bimetallic cable lug, which is very time-consuming and expensive.

To collect the power on the copper busbar, clamps are needed that permit simple assembly and disassembly and are compatible with aluminium cable because of the rising price of copper today. Steel clamps of different types can bring large number of lines together on copper busbars. These are a cost-effective option and a better alternative to cable with a bimetallic cable lug, since they require less space and are can be fitted more flexibly and faster.

FTG’s enhancement, the BKNA series, can also be used for aluminium cable, since they incorporate an intermediate plate so that the aluminium and copper do not touch. The intermediate plate also stops the cable from bending by spreading the screw plate load on the cable end. Covers between the positioned steel clamps make the system contact-safe.